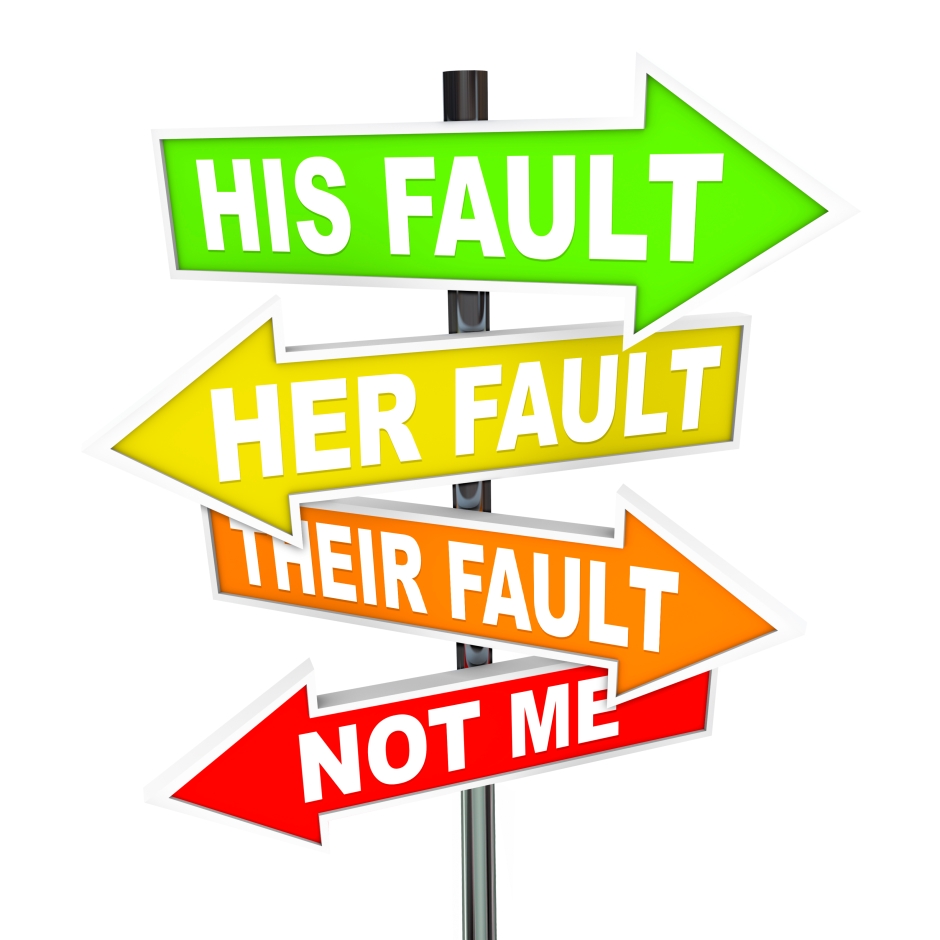 Fix the Problem, Not the Blame

I hate it when I lose the blame game. It hurts my pride to admit I’m wrong, and it’s no fun suffering the consequences of my bad behavior or thoughtless words.

If I’m playing the blame game, I try to point the blame elsewhere, so maybe I can escape some pain. If I can transfer responsibility to someone else, maybe I won’t have to do the work of finding a positive resolution to whatever disappointing or hurtful event occurred. It seems easier and safer to be a victim of someone else’s errors than an empowered problem solver. However, it’s only easier in the short term – and only if I’m at ease with fooling myself.

We sometimes play the blame game because we want justice. Those who are to blame for what has gone wrong need to be punished. And we certainly do want there to be consequences and accountability when people, ourselves included, harm others. But retribution alone often creates more problems than it solves, as one bad deed leads to another. We may end up like the infamous Hatfields and McCoys, feuding for decades. Better to listen to Martin Luther King, Jr., who left us with a more fruitful legacy, “Darkness cannot drive out darkness, only light can do that. Hate cannot drive out hate, only love can do that.”

There’s a Difference between Fault and Responsibility.

When someone treats us badly – abuses us, lies to us, disrespects us – it’s not our fault. However, if we want to take power over our lives, we must take responsibility for our reaction to whatever happens to us. We can learn to problem-solve instead of blame; seek to understand versus seek revenge; discover how to heal, not hurt.

As a research psychologist, I’ve interviewed people who’ve forgiven major offenses. They weren’t to blame for the abuse they suffered or the pain caused by others. Sadness and anger were their natural reactions and some of them spent time playing the blame game, creating a personal prison of fear, distrust, and loneliness. What they had in common, though, was that they each eventually chose to discard the identity of victim, take responsibility for their thoughts and feelings, and create a courageous, inspiring next chapter in their life story.

One man, who described himself as “a recovering racist,” said when he was angry and unforgiving he felt “like a rat scurrying around in the dark.” One woman, who was finally able to forgive an abusive parent, said she “could now be a light for others.” A Lakota woman turned to prayer after the murder of family members and before her heart could harden. She knew she wanted to be a good role model for her tiospaye (extended family).

The people I interviewed weren’t to blame for the pain they experienced, and they needed to grieve, but they knew blaming and complaining made them victims. Taking responsibility for their feelings, thoughts, and actions empowered them and allowed them to move forward in a moral manner that gave them peace.

Individuals play the blame game and so do groups. Racial and ethnic inequality and discrimination are big, tough problems we Americans face. To escape blame and escape efforts to improve the situation I hear statements like, “I didn’t steal the Indian land. I didn’t have slaves. Don’t blame me. Why don’t those people just get over it?”

Unfortunately, we don’t “just get over” historical trauma, colonialism, and other injustices. Those issues are real, difficult to overcome, and not the fault of those who’ve been oppressed.

But fault is different than responsibility.

It takes strength for the oppressed to beneficially deal with a traumatic past and speak truth to power.  It takes courage for those in power to admit to past wrongs and the need to resolve injustices. But the only way to avoid more oppression and trauma is for all parties involved to acknowledge the harm, combine justice with compassion, and repair the broken parts of our system.

Individuals and groups play the blame game and so do nations. Most people know about the Holocaust and how the blame game was played against the Jewish people and other groups in Germany. What’s not as well known, however, is how the aftermath of the Great War, or World War I as we now know it, laid the groundwork for World War 2. The winners of the “war to end all wars” blamed the losers for the senseless and horrible destruction and death that occurred, and the Treaty of Versailles was all about vengeance. There was plenty of fault to go around on both sides, but the Treaty of Versailles harshly punished Germany and its allies, leading to hardship, feelings of unfairness, and a receptive environment for Hitler and the Nazi Party’s propaganda. Blame didn’t lead to progress, it led to yet more blame.

We can learn from our mistakes, however, and one of the great accomplishments of the post-World War II era was the Marshall Plan. Instead of a vindictive aftermath as in World War I, the United States, blessed with being distant from the combat and economically advantaged by the wartime mobilization, developed an aid package for rebuilding Europe. The goal was creating political stability. Secretary of State George Marshall said, “Our policy is directed not against any country or doctrine but against hunger, poverty, desperation and chaos.” We decided to fix the problem, not the blame, and Germany and Japan became allies of the United States.

Sometimes we try to escape blame by contending that the other side is worse. I remember asking a German exchange student in my world history class what he was taught about World War II. He replied, “We did some bad things, but the Soviets were worse.”

I can think of many conversations I’ve overheard and regretfully participated in that start with an issue of some kind and turn into a contest to determine who’s worse. For example, let’s say your significant other admonishes you – “You forgot to take out the garbage.” Instead of an apology, you might retort – “Well, you forgot to take the dog out last week and I had to clean up a huge mess.” If we’re not careful, we may spend the evening recounting past wrongs, and adding to a list of hurt feelings.

It’s not easy to abstain from the “who’s worse” game, but in a more constructive scenario we would respond to the recognition of our deficiency with a reply like – “I’m sorry. I’ll put it on my to do list so I don’t forget next time.” Followed by our loved one’s compassionate reply – “That’s okay, honey. I forget things too.”

Political conversations between people from different political parties playing the “who’s worse” game may go like this – “I think Republican Senator Ned Narcissist should be charged with corruption.” Followed by – “Well, your Democratic Senator Sid Sicko is far worse. He lies about everything.”

Again, if we’re not careful we may spend unproductive hours describing offensive behaviors by politicians from the “other side,” uselessly trying to persuade someone their side is worse than ours. We become polarized and the more someone tries to convince us we’re wrong, the more we dig in and defend our position. Our polarization paralyzes us.

If we want to resolve an issue, we need to focus on solutions, not on who’s worse. We need political conversations more like this – “I’m really worried about Senator Narcissist’s actions. I wonder what we can do to reduce corruption in politics.” Followed by – “Yes, Senator Sicko seems to be making bad choices as well. How do you think we could improve the system?”

Unfortunately, no one’s behavior improves just because someone else’s behavior is worse. Neither the blame game nor the “who’s worse” game fixes problems.

So what does? Getting our fears under control, taking responsibility, opening our minds and hearts to others, and working on solutions.

How do you win the blame game? By refusing to play.